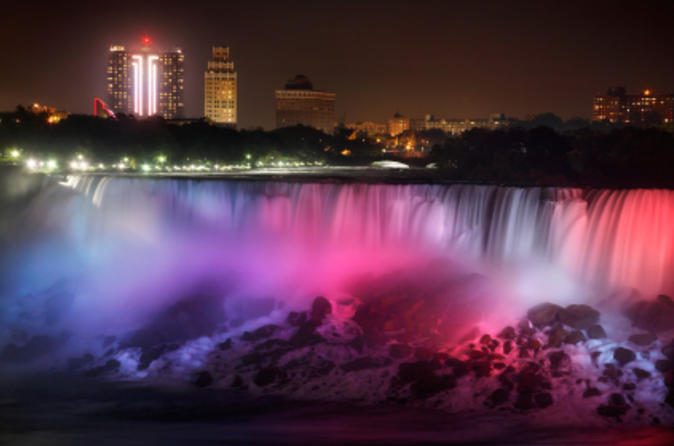 This year, Niagara Falls was lit up in brilliance and it appeared 3 times to 14 times brighter than it ever has in history. LED lights are now making the rushing water appear to be a golden sunset, a red flow of lava or a giant ocean wave with a variety of blue shades. After a number of technical challenges, the Canadian and American falls were lit up with LED lights in December, which was just in time for Christmas and the New Year.

A lot of innovative thinking went into bringing this new technology to Niagara Falls and is just one of the many examples of how LEDs can light up large spaces and entire buildings. The sweep and the intensity of the lighting had to be perfected by using a lot of trial and error and ingenuity to make it right. The end result was a system that could adjust and rotate the lights to change the intensity and blend the colours.

Due to the nature of LED technology, the lamps remain cool even when they are running at full intensity. With these new lights, the possible colour combinations number in the millions.

It was a $4 million project but the cost was split between the US and Canada. As a result, new ideas came to light for illuminating other public spaces and buildings to provide either broad light sweeps or spot lighting.

In the past, xenon gas lamps were used in Niagara Falls. They have all since been replaced and the new LEDs use 60% less energy and have a lifespan of approximately 25 years. The older gas lamps only had a lifespan of 1,900 hours. As well, the xenon lamps that were previously used failed to light up parts of the cascade. This is the first time ever that Niagara Falls can be seen with a full lighted full without any dark spots.

LEDs make environmental and building lighting more dynamic offering more control over the light areas and providing a brighter overall effect. LEDs are definitely destined to take the spotlight over lighting designs on a larger scale.

To find out more about LED lights and how they can be used in both large and small applications, please view our catalogue or feel free to give us a call at (905) 282-0881 to discuss your LED lighting options.